Today, the City filed its motion to intervene and comments with the Federal Energy Regulatory Commission (FERC). FERC is soliciting motions to intervene and protests as stated in their notice dated July 26, 2019.

The deadline for filing motions to intervene and protests is 60 days from the issuance date of the notice, or September 24th (this is a correction for another deadline of October 1st the City previously estimated).

Motion to Intervene by the City of Lake Elsinore

In January, Dr. Michael A. Anderson, Ph.D., completed a final report on behalf of Nevada Hydro Company for submittal to the Federal Energy Regulatory Commission (FERC) regarding the “Impacts of the Lake Elsinore Advanced Pumped-Storage (LEAPS) Project on Water Quality in Lake Elsinore.” As the stewards of the Lake and recognizing its value to our community, the City hired a qualified water quality consultant, Stillwater Sciences, to conduct a peer review of this report.

During this review, Stillwater Sciences identified several deficiencies in the report. Specifically, the peer review summarized its finding by stating “because of the short periods analyzed, incomplete documentation of model uncertainty, and the inclusion of other factors unrelated to LEAPS (e.g., initial SWP supplementation, O2 additions), the report does not provide a clear water quality assessment of LEAPS operations over the long-term.”

On Friday, August 2, 2019, the City submitted a cover letter and a full copy of this peer review to FERC to express concerns regarding the final report and the City’s concern that this study and others routinely downplay and minimize the impacts of the LEAPS project on Lake Elsinore and the surrounding communities. The City has requested that FERC require Nevada Hydro to correct the deficiencies found by Stillwater Sciences in this final report on water quality.

On July 26, 2019 the Federal Energy Regulatory Commission (FERC) officially accepted Nevada Hydro Company’s application for the Lake Elsinore Advanced Pump Storage Project, known as LEAPS. This action means that Nevada Hydro has now submitted certain required information and resolved deficiencies previously identified by FERC. Although the application was accepted for filing, FERC has not made any decision approving LEAPS. That decision-making process will take place over the next 18 to 24 months.

At this time, the next major step for FERC is to issue a “notice of intent” to prepare an environmental impact statement and will include setting dates for local workshops known as “scoping meetings” sponsored by FERC and open to the public.  At least one workshop will be held in the City to ensure our citizens have the opportunity to express their concerns related to this project. The City anticipates that this notice will be issued in the fall but FERC has not made public a permitting timetable.  Once prepared, the environmental impact statement process will include an opportunity for the public to submit comments and concerns.

In April, the City Council unanimously voted to take a formal stance “to oppose the LEAPS project subject to conditions.” See update below from April 2019 (see below). Last month, the City sent a thorough comment letter to FERC addressing legal concerns related to Nevada Hydro’s application and inconsistencies with existing City agreements related to the Lake’s management including the lake level. The City will continue to engage directly with FERC in order to educate the Commission about our concerns and project impacts to our Lake and the community.

FERC’s July 26, 2019 notice also solicits motions to intervene and protest. Intervention is not required for a citizen to comment on the project but is required if the person desires to later challenge FERC’s decision on the project in court.  The deadline for submitting motions to intervene and protest is 60 days from the date of the notice. Persons interested in intervening in the proceeding should review the notice, which sets out the basic requirements: Notice. Additional information is available on FERC’s website at https://www.ferc.gov/resources/processes/intervention.asp

While there, our City team met with several officials from a variety of agencies, committees and congressional seats to discuss and advocate on behalf of the community related to LEAPS including water quality, water quantity, the dynamic and complex nature of our Lake, and the importance of this project to our entire community. Something the City emphasized throughout our trip is the history of the lake and a state mandate that requires the City to maintain the lake as recreational body of water in perpetuity.

Overall, the trip was successful and assured us that the City has taken all the steps necessary to ensure that our voice will be heard as the process unfolds. Most encouraging from the trip was the Federal Energy Regulatory Commission’s (FERC) willingness to conduct a LEAPS meeting in Lake Elsinore for residents as well as their interest in keeping the City informed.

At this time, there are no actions necessary for the City or the community. However, the City will be sure to share any and all appropriate opportunities to submit comments to FERC or others regarding this project.

As a reminder, the City took a formal position of opposition in April subject to conditions (see April update below) and will continue to work on behalf of protecting our community.

Next Step for the Project: The project is still in the midst of the federal licensing process with the Federal Energy Regulatory Commission (FERC). Nevada Hydro has a deadline to submit all additional studies and information as requested by FERC by June 30, 2019.

For the last couple of years, the City of Lake Elsinore has taken a proactive approach to understanding the Lake Elsinore Advanced Pump Storage (LEAPS) project proposed by Nevada Hydro. The City has actively advocated for more detailed studies and explanations concerning the project’s impacts on the Lake and the community.

On April 9, 2019, the City Council unanimously voted to take a formal stance “to oppose the LEAPS project subject to conditions.”

During the meeting, the City received comments from City staff and the community. Key concerns expressed centered on impacts to the Lake including water quality, fluctuating Lake levels, the fishery, ecology, shoreline impacts. Other concerns raised included the potential for disasters if a proposed dam for the project’s “upper reservoir” in Cleveland National Forest were to fail, fire hazards from the proposed 32-mile segment of high powered transmission lines, the impact on wildlife, the overall impact to the aesthetics of the community and the Lake, and the potential for property damages and acquisitions.

The City Council urged Nevada Hydro, the project proponent, to give serious consideration to these concerns and to provide additional project details, including actual and measurable public benefits.

The City is willing to continue dialogue with Nevada Hydro, but is seeking meaningful answers and solutions to concerns related to the project. While LEAPS could have the potential to improve Lake Elsinore, there are far too many unknown and potentially negative impacts to the Lake and the community at this time.

For these reasons, the City Council urged Nevada Hydro to act in good faith and provide clear, positive benefits to the City of Lake Elsinore.

ABOUT THE PROPOSED LEAPS PROJECT:

The LEAPS Project is a hydroelectric project, which consists of an upper and lower reservoir with a set of tunnels running between them. When electrical energy is in high demand, the water in the upper reservoir is released through tunnels flowing down to turbines at the powerhouse. The upper reservoir becomes, in effect, a source of stored energy.

For LEAPS, the Lake would serve as the “lower reservoir” and the upper reservoir would be constructed in the Cleveland National Forest at Decker Canyon (just south of State Route 74). The pump/powerhouse facility would be located near the Lake on the west side of Grand Avenue in the Lakeland Village area (and is typically referred to as the Santa Rosa Powerhouse). To power the pumps and deliver the generated electricity onto the state’s electrical grid, LEAPS also involves the construction of approximately 32 miles of 500 kV transmission lines and towers.

The project applicant, Nevada Hydro, has proposed a grid interconnect near Lee Lake to the north. The transmission lines will travel south largely within the Cleveland National Forest and connect to the powerhouse. The powerhouse will also be connected by 500 kV lines and towers traveling further south primarily through the National Forest to an interconnect point adjacent to Camp Pendleton. The 500 kV lines in the general vicinity of the powerhouse will be undergrounded.

Nevada Hydro is currently seeking a permit to operate LEAPS from the Federal Energy Regulatory Commission (FERC). While the City is fully participating in the formal FERC licensing process, concerns remain about coordinating the efforts of federal agencies which the City believes have a shared interest in improving the Lake and ensuring that federal agencies fully understand the City’s position and concerns related to the project.

The City of Lake Elsinore continues to monitor and inform our community as this project makes its way through the federal approval process to ensure our best interests are protected.

On Friday, June 15, 2018 the Federal Energy Commission (FERC) responded to the additional study requests from the City and eight other resources agencies. The City submitted its request for additional studies on December 1, 2017.

The deadline for Nevada Hydro to submit the additional studies is set for September 13, 2018.

On Monday, January 8th the City received a copy of a Deficiency of License Application and Request for Additional Information letter sent to The Nevada Hydro Company regarding their proposed Lake Elsinore Advanced Pump Storage (LEAPS) Project.

The letter was sent by the Federal Energy Commission (FERC) and states that Nevada Hydro's application was not complete (i.e. does not conform to the requirements of the Commission's regulations) and requested additional information.

Among the additional information requested, FERC asked Nevada Hydro to identify a specific source of water to maintain the operational level of Lake Elsinore above 1240 feet, assess the availability of water, and coordinate with the Elsinore Valley Municipal Water District and the City of Lake Elsinore to develop a reservoir operation plan for related to the ongoing operation and maintenance of the Lake.

Nevada Hydro has 90 dates from the date of this letter, January 3, 2018, to respond to the letter.

City staff provided an update to our City Council about the LEAPS project proposed in and near our City.

In addition, the City Council approved an agreement for government relations and legislative advocacy services in Washington DC to regularly monitor this project and advocate on behalf of the City to ensure our community's best interests are protected as this project makes its way through the federal licensing process. This includes engaging the congressional delegation and federal agencies to raise awareness about the project and its potential impacts to our community. 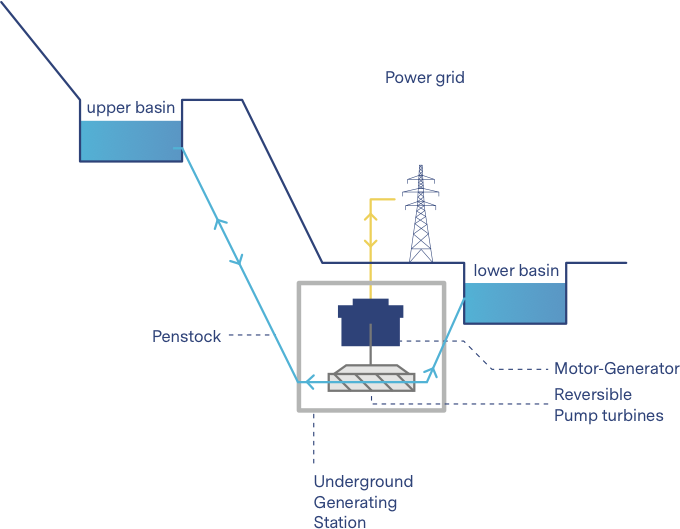 Motion to Intervene by the City of Lake Elsinore